YWA15 Unsung Hero of the Year Ben Cordy from Youthscape on Vimeo. 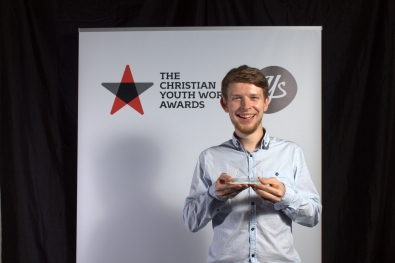 Unsung Hero of the Year

Ben grew up in Leeds and was a member of the Leeds Youth Cell Network as a young person, going on to become the director of the network. Recently Ben took the difficult decision to close the network at the end of this year, believing that there might be more effective ways to establish relevant Christian gatherings for young people across the town. Ben now dedicates his time to supporting your workers across Leeds, enabling them to better serve their young people.

Ben was nominated for this award by Emily Bosworth from Leeds Faith in Schools. She said, "Ben is always there for a cup of tea, prayer and helps in moments of panic. Ben is constantly letting me know he's found a great volunteer for a school near me, set us up with a meeting into the catholic secondary schools, he's sent trust money our way (and others way) when people approach him to ask who needs it!! Ben has 'the youthworkers of Leeds' backs. Ben Cordy is fabulous. I think you could contact any Youthworker in Leeds and they will tell you this. He is totally unsung within his role, but valuable support to the work we're currently doing in the city."

"Behind all successful youth work across the UK is an army of unsung heros. Unsung heros are the best volunteer secret agency you could ever be part of." - sponsor, Jeff Pullinger.

Receiving the award, Ben recalled youth workers who had invested in him in the past, preparing the ground for him to be able to support and enable more youth workers to do the same. "This is about what God's doing with young people and we need to let ourselves release that to happen in all the ways that we can.

This award is for a youth worker who's excelled at building positive relationships with young people, helping them to see their

It’s all about being exceptional. For the individual whose contribution to youth work is outstanding. This award is for a youth worker who's excelled at building positive relationships with young people, helping them to see their potential and fulfil it. Their faith inspires everything they do and they work to the highest standards of best practice. They are hard-working, patient and caring and a great example to young people.

To be eligible for this Award, the nominated person must be a part time or full time paid youth worker over the age of 18 serving in a church or organisation.

This award is for a volunteer who's shown exceptional commitment to Christian youth work, freely offering their time and energy

Sponsored by: London School of Theology

It’s about being devoted. For the volunteer who shows wholehearted commitment in their service to young people. This award is for a volunteer who's shown exceptional commitment to Christian youth work, freely offering their time and energy to serve young people. They are passionate, skilled, reliable and servant-hearted. They are a hero of the youth work world and this Award celebrates all that they give to make youth work happen.

To be eligible for this Award, the nominated person must be an unpaid volunteer over the age of 18 serving in a church or organisation.

This award is for an employer who gives outstanding support to their youth workers. They invest in them, providing practical and

To be eligible for this Award, the nominated employer must be a church or organisation who oversees or manages one or more part time or full time paid youth workers.

Sponsored by: CYM
Prize: £300 to spend on the project

This award is for a project or piece of work that's bursting with faith and creativity.

It’s all about being pioneering - we're looking for a project that pushes the boundaries, creating new youth work for the next generation. This award is for a project or piece of work that's bursting with faith and creativity. It may involve a fresh approach in an existing context or show innovation in reaching out to new groups of young people. It will have successfully overcome challenges or filled a gap in Christian youth work.

To be eligible for this Award, the nominated project can be an event or short or long term programme run by a church or organisation.

It’s all about quality, the resource that no youth worker should leave home without. This award is for a resource that's a proved itself to be a genuine asset to Christian youth work. It will have been carefully researched and developed to the highest standard, with a commitment to excellence. It's creative, innovatiove and relevant, and will be used by youth workers again and again.

To be eligible for this Award, the nominated resource must be either a currently available book, media (dvd, cd etc), software application or other product that has been designed primarily for use in youth work.

Seriously Awkward, from the Children's Society

Sponsored by: The Methodist Church

It’s all about example. For a young leader whose faith in God and leadership inspires and influences their peers. This award will be given to a young Christian who is rooted in their local church and having significant influence on other young people around them. Their impact is in demonstrating leadership to their peers. Their relationship with Jesus influences their character and the vision with which they lead. They are humble and hard working, patient and willing to learn. They are a great example to young people

To be eligible for this Award, the nominated person must be between 14 and 18 and a committed member of their local church.